Watching a play come together is a hugely exciting thing for me. If you are a layperson (I don’t mean non-clergy, I mean someone not involved in the making of theatre) and have the opportunity to sit in on the various stages of the process, you should jump at the chance. I remember a production I was involved in many years ago at The Arden Theatre in Philadelphia in which one of The Arden’s board members had the opportunity to join us in the rehearsal room for much of the process, and his excitement to see how it all came together was palpable. I always try to remind myself of that when in a rehearsal room. What we do to create a show is fun, exciting, unique, and an absolute joy. 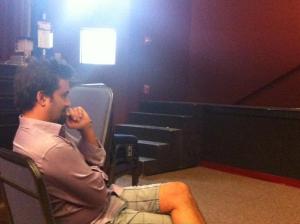 This week has been great in rehearsal thus far. Some of my favorite work as an actor and director is getting into the nitty-gritty, moment-to-moment story telling necessary to bring a play to life. And this group of actors has been so much fun to work with. Their talents and skills are prodigious, and they have very facile actor brains. What I mean by that is that not only are their imaginations always working in high gear, they are able to take input from their fellow cast members and me, the director, and quickly (very quickly) incorporate it into their performances. This is not an easy thing to do, but it sure is fun to watch.

Not only has that part of things been a blast, but we are at a magical point right now in the rehearsal process for Something Intangible. The actors, stage management, and myself have been working together getting the show in shape. In several other buildings across town, the crew has been getting the physical elements ready. And soon, like in just a few hours, we will start to blend all that work into a cohesive whole. This is where things really start to pop. All the groundwork we have laid will now start to come to life.  Actual doors and windows, real costumes, real props, beautiful music, all of these elements will begin to lift all the incredible work already happening to the next level. And ultimately, that is what we should be doing everyday in rehearsal: taking things to the next level. Run through a scene, throw some ideas onto the table about how to make it better, truer, deeper, funnier, watch it percolate in the facile actor brain, and then run the scene again, thereby taking it to the next level.

It has been so much fun for me to watch this group of actors as they traverse the levels approaching our first audience. It is an intricate play, with many details to get right, and plenty of opportunities for missteps. But the missteps are part of the fun. Having the ability to get things wrong, allows us to see how we can get them right. And generally when something goes wrong, it usually involves lots of laughs, some ribbing, some joking, and ultimately a deeper bond of trust amongst the cast.

And now, here we are, home stretch of rehearsal before we head into tech (check out Kristen Coury’s great blog about tech from a few weeks ago). It has been a blast, and I am sure it will continue to be as we really start to put it all together.