The Creativity of Giving

It’s the end of the year, and charitable giving is on everyone’s mind in Naples. Or at least, in the version of Naples I see every day. I do work for a 501(c)3 organization, by the way! As anyone who has been to a Gulfshore Playhouse production may have heard, we rely upon fundraising in order to fulfill our mission and we are fully aware that many people give to charity just before the calendar year ends for tax purposes. But I am not attempting to write a pitch for you to donate to Gulfshore Playhouse (of course, we would be SO GRATEFUL if you would consider it). What I’m attempting to do is tell you how many awesome ideas come to the table when you’re talking about fundraising. 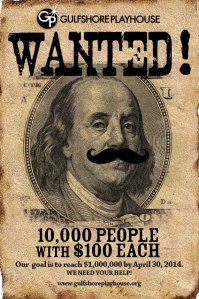 In my year and a half at Gulfshore Playhouse, some of the most innovative ideas I’ve been a part of have come out of our need to fundraise. Our Wanted Campaign is one of those ideas. I can’t even tell you whose brain child the actual campaign was in the beginning, but our staff took that idea and ran with it. And nearly a year into the campaign, we have created a way to motivate community members who do not ordinarily think about charitable giving to support a cause they believe in. Because once you see great theater, how can you not believe in the power of it? Well, I’m sure I’m a bit biased, but still. $100 isn’t much to give for many people, but it can make a difference. And hopefully our western themed campaign will prove that to you.

Now, if you asked me two years ago if I would like working on fundraising, you would have heard a resounding NO as an answer. Because asking people for money is terrifying. But coming up with ideas to creatively make that ask? I’m alright with that. Just don’t send me out into the trenches! I’m not cut out for it. I will hem and haw all the way around the subject, even when the cause is something I love as much as I love the business I work in. But what inspired this blog about fundraising and awesome ideas, you may ask? Well, you’ll have to wait until you get a lovely little email from Gulfshore Playhouse that I happen to be in love with. I hope you’ll like it too.