The First Day of School

Something I love about working with theatre people is that we all (generalization, well, many of us) still have the wonder of children, curiosity that makes the world look fresh, and a fertile imagination.  There is something inside of us that causes us still to believe in magic, and to be open-minded, good collaborators and “outside the box” thinkers more often than not.

Now I don’t mean to say that people who work in theatre are childISH, although we see that sometimes too.  I mean that we approach the things of life a bit differently.  We’ve seen the difference in the way an adult will encounter let’s say a worm, or a rock…with their “already decided reactions” such as “ewww, scary worm” or “oh, boring rock.”   But a child seeing a worm for the first time, might be thoroughly engaged, examining every ring along the body, feeling the sliminess on his hands, but not realizing it is something of which he should be afraid.  A rock may present many creative opportunities to a child (or a theatre-maker), such as a hat, a chair, or a means of being just a tad bit taller.  And you see what I mean.  We do that, we’re imagination junkies.  We believe in Neverland.   I carry my magic wand around with me, Cody still wears his Gryffindor jersey, and the rest of my colleagues are still awash in the “pixie dust” of creative ideas. 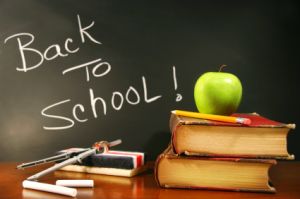 And thus, it is fitting that we also get to experience the “first day of school” over and over.  Do you remember that feeling?  Each year, it was like a box full of presents: new teachers, new classes, new clothes…maybe new friends.  But along with the hope and excitement, came the anxiety and stress, “will they like me?  will I like them?  will it be as good as I expect?”  Here at Gulsfhore Playhouse we have the “first day of school” six times a year, each time we start rehearsals on a new show.  Each time around it’s a new play, a new cast, a new group of designers, a new look; and we all have to figure out how to “play together” pretty quickly.

This time, it’s our World Premiere.  Today is our first day of school for THE GOD GAME, which means we won’t only have three new actors with us, but a Playwright, and a new lighting and sound designer as well.  How exciting.  And yes, I am full of hope!  And, of course a fair bit of nerves as well!   I’ll let you know how it goes when I get my report card!