All The World’s A Stage

I found myself thinking that it felt like we had a repertory company here at Gulfshore Playhouse. 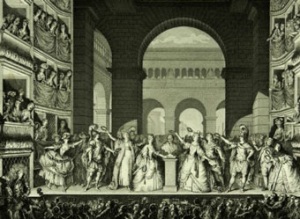 Someone asked me at our 10th Anniversary Gala on Thursday, “Where did you perform when you started?”  To which I replied, “I started Gulfshore Playhouse in my house, so we didn’t perform anywhere.”  And that’s the truth.  When we started, it was two years before we actually started producing plays, and even then they were sporadic both in venue and schedule.  Today we have grown to a $1.4M budget, 16 staff members (and growing) and to feel as though we have a Repertory Company of amazing actors here at the Playhouse is amazing indeed.

And as chaotic as it has been…

And as little sleep as I have gotten…

And though it feels as though we go from show to show, and event to event, and meeting to meeting…

I wouldn’t have it any other way.  We are making great things here at Gulfshore Playhouse and serving Theatre with a capital T.  And I feel so blessed.

The cast of The Game’s Afoot is one of the “gamest” casts I have ever met.  All eight of the cast members, which include Claire Brownell who played Blanche and Gwendolyn for us, Cody Nickell, our Artistic Associate, and six actors who are new to us, jumped in with both feet from the very first read-through of The Game’s Afoot.

When they got here and had barely begun rehearsals we asked them to participate in our Season Announcement Presentation, performing scenes from the plays we were announcing as part of our 14-15 season.

And they said YES.

When one of the actors had a health problem, I reached out to Jeff Binder, who played Matt in The God Game if he would jump in and be the spur-of-the-moment understudy.

And he said YES.

I asked Christopher Gerson, who plays Felix in The Game’s Afoot, to help us put together a promotional video for our gala.

And he said YES.

When we asked all the actors to participate in the readings of two of Ken Ludwig’s new plays on their day off?

And when I asked Alexis Hyatt, who plays Aggie in The Game’s Afoot, if she was willing to play an 8 year old boy in All My Sons because we couldn’t find one who could commit to our grueling schedule?

And did I mention half of them are also cast in All My Sons and we start rehearsals on Friday?

And thus, why I suddenly feel as though we have a repertory company here at Gulfshore Playhouse.  And I am stoked.  I will be sad to see them all leave, because it’s brought me great joy to be serving the Universe with this great bunch of people creating art that will change people’s lives.  I will be sorry to see them leave.

And just a reminder: we’re doing readings of two of Tony-nominated, Olivier Award-winning playwright Ken Ludwig’s brand new plays (so new, they aren’t even finished yet) on Monday 3/3 at 3pm, and if you come, (click here for tickets) you’ll be able to give your feedback and meet Ken in person, and buy a copy of his new book, “How to Teach Children Shakespeare.”  (click here to buy his book)  And in this way, you can play your part by  helping us to foster new works, expanding the canon of American Plays and serving Theatre with a Capital T.