The Remount that Really Wasn’t

We have never done a remount at Gulfshore Playhouse before.  I guess, officially, I personally have when I directed the remount of THE GOD GAME last season at Capital Repertory Theatre.  However, even with the same three actors, and the playwright on board, it felt like a completely different show, additionally done in a thrust vs. in a proscenium.

So, doing JACOB MARLEY’S CHRISTMAS CAROL for the second year in a row is the first time that I am doing an official “remounting” of the same show, with the same actor, in the same space.  And yet…here’s the amazing thing:  somehow, it’s like working on a whole new show.

With permission from the playwright, we have made a few trims to the script, which means we will change a few lighting and sound cues.  And we are once again in rehearsal, going through the play piece by piece.  Deepened by the fact that we have our vocal coach, John Patrick, with us for three days, we are examining each nugget, listening for sense, changing tactics and objectives, adding or changing music cues, and getting to know each of the characters, and their voices, even better.   It is absolutely thrilling. 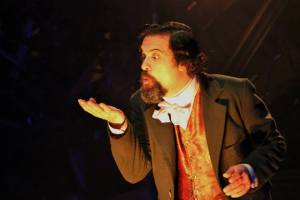 This is what I love about working in the theatre business.  It is creative.  That is what good theatre-making absolutely demands: stay open, continue to activate your curiosity, put your ego aside so that you serve the play (and not your needs) to the best of your ability, and hang on for the ride.  And what a ride it is!  It is my belief that we are deepening and broadening the meaning of the play, finding more humor and ways for Cody (and his host of characters) to connect with the audience more, and generally taking the opportunity to make a great show even greater.  I truly hope you will come see it.  There’s a reason that A CHRISTMAS CAROL has lasted nearly two centuries, and has been adapted and revisited in countless ways.  We need it.  It’s a reminder and an invitation to reflect on who we are, the things we hold dear, and the way we live our lives.  And this particular adaptation is special indeed, following Jacob Marley through the story, and participating in his journey.  It’s a little like landing in Oz before Dorothy did.  A unique perspective on a well-known tale.

I’m so glad to have great collaborators in Cody and John who are not willing to sit back and say “well this is how we did it before” or “this is good enough.” Each word, each moment, and each voice is being carefully scrutinized with loving care, in an effort to give our utmost respect to Mr. Mula, Mr. Dickens, and the highest of high, Theatre with a Capital T.

And I couldn’t be happier.