Kristen Coury is the Founder and Producing Artistic Director of Gulfshore Playhouse. She will be blogging on Saturdays throughout the 2014-2015 Season.

You know the old saying “Dying is easy, comedy is hard.” Well, it’s the truth.

And even as I say that, the word “hard” is filled with layers of delight, challenge, hilarity, debate, disagreement and shared resolution. What I am describing is the rehearsal process for Vanya, Sonia, Masha and Spike, the show next up in our season, and the most produced play this season nationally.

Amy Van Nostrand, the wonderful actress playing Masha, who also played Kate Keller for us in All My Sons, asked me the other day if we had the same amount of rehearsal time for both shows.

Yes, is the answer. Hard to believe. Why? Because Miller is pure drama, and once you sink your teeth into it, you go for the ride. Comedy is math, it is numbers, it is anticipating where the laugh will be and working on timing for three hours to get serve up the joke.

And it’s not only about timing. The timing could be “right” but if the action isn’t clean, it looks mushy and it’s not funny. It’s also about being sure to give the focus to the actor who’s telling the story, which is like throwing a ball around the stage in an ensemble piece such as this one.

What makes this piece particularly tricky to me is that there are several moments in the script that could be particularly touching or heart-warming onstage, but there’s always that question of balance. Once you’ve set the “comedic tone” is it okay to delve into seriousness? Where is the line between high comedy and truth telling? The conversation has often gone something like this: “I want you to be completely truthful in that moment, but follow it with a Lucille Ball-style wail.” To which the response was “Do you want comedy? Or do you want truth?” 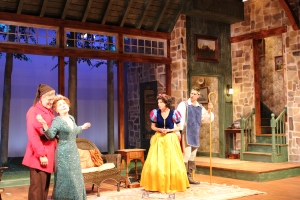 The answer is: I want both. And herein lies the challenge. It’s really something like “truth exponential” because, in comedy, we’re usually exploring those moments in one’s life where big, hilarious, bigger-than-life things happen, and therefore reactions are larger-than-life as well. We don’t often notice them in “real life” but they’re there. And they’re the memories that often get brought up when someone is missing from holiday table or a gathering of friends. These are the moments that, when remembered, bring tears of laughter to our eyes. Our hope is to do the same on our stage so that when you remember these moments you will laugh til you cry as well.

And then that “other character” in the play arrives. The audience. We are two previews in, and have had two extremely diverse audiences in terms of what they reacted to, how they reacted, and how much they reacted…so now a new game begins of figuring out what worked what didn’t work, while continuing to hone, sharpen and clean. We’ve learned a LOT, and today’s final two hour rehearsal will help us finalize those lessons and get it ready to serve up in a nice “Hootie Pie” for opening. Don’t know what I mean? You’ll have to come see the play to find out!

Comedy may not be easy, but it sure is fun.