If you’ve ever known a teenager—or ever been one—odds are, you know how fraught that stage of life can be.  Growing, changing, learning, taking on mounting responsibilities, and planning for the future can be hard to do when you’re still figuring out just who you are.

In my work with teenagers—and in my experience, having been one not too long ago myself—I’ve noticed something intriguing:  Many middle and high school students love to write.  Whether in diaries, journals, school notebooks, blogs, or on social media, teenagers love the written word.  They fill up the margins of their worksheets and the backs of their hands with their thoughts in ink.  For many, it is a refuge.  For others, it is a form of self-expression.

Given this tendency, it makes sense that one of the biggest doors to the theatre world for teenagers is playwriting.  Both students who love to perform and students who shy away from the stage can fall in love with playwriting.  For burgeoning young writers, playwriting can be an amazing way for them to experience the thrill of seeing their written creations come to life, or even taking on the mantle of the characters they create by acting in their own works.

This is what enticed me into playwriting in the first place, as a teenager myself.  I had been hired to be the Drama Director at a sleep-away camp in the wilds of New England, directing the camp plays by day and supervising a cabin of third-graders by night.  I searched for age-appropriate plays, knowing that my budget was almost nil, and came up extremely short.  I wished that I could magically make a script appear that would engage and entertain campers, while providing them with an artistic challenge.

Then I realized: I had the power to do just that.  I got out my computer and went to town, ideas flying from my brain synapses to my fingers… or however it is that happens; I’m no good at science.

Four weeks later, seeing my campers-turned-actors performing my script on stage was one of the best and proudest moments of my artistic life.  Since then, I have tried to provide guidance to those young people who want to experience that moment for themselves.  Gulfshore Playhouse now offers after-school and in-school playwriting programs for young people, as well as our STARwrights program. 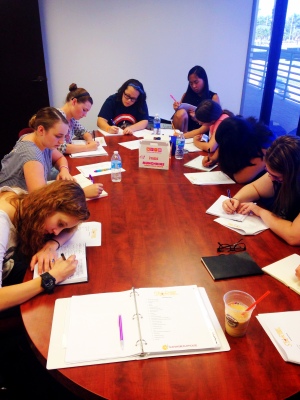 Participants during a STARwrights session

STARwrights is an opportunity for young playwrights to meet monthly at Gulfshore Playhouse for peer and professional mentorship, culminating in their eventual participation in our New Works Festival.  I’ve written at some length about our STARwrights, because they are a talented, kind, and inspiring group of young people—all young women, this year—and I can’t help but share their progress with all of you.

This month, our STARwrights had the incredible opportunity to work with Gwydion Suilebhan, playwright of Gulfshore Playhouse’s upcoming World Premiere of The Butcher, which was also featured in last season’s New Works Festival.  We were a small but mighty group this month, as it is SAT/ACT season.  But the smallness of the group only made the experience more specialized for the STARwrights present.

Under Gwydion’s expert guidance, our STARwrights were challenged in ways I never would have been able to think of.  They were made to condense and distill the meaning of their writing down to the bones.  They pulled characters out of thin air, and created beautiful stories in five minutes flat.  They overcame obstacles of length and unoriginality, and were taught how to avoid the pitfalls of cliché.  I participated and observed, gleaning everything I could from Gwydion’s masterful teaching.

The cast and crew of The Butcher were also generous enough to open the rehearsal room to the STARwrights, who avidly watched them engage in table work and took copious notes on the role of the playwright in the room.  They welcomed the students into the room warmly, and made the STARwrights feel at ease.

As my students sat enraptured, I meditated on the eagerness of these young people to learn, their fearlessness in sharing their work, and their kindness towards each other—as well as the kindness of people like Gwydion and the others involved with The Butcher in providing these students with opportunities to learn and grow as playwrights, theatre artists, and people.