Kristen Coury is Gulfshore Playhouse’s Founder and Producing Artistic Director. She will be blogging on Saturdays throughout the 2014-2015 Season.

As you know, I always say that theatre can change the world.  One giant way that theatre can inspire change is through what I call the “not me” syndrome.  Let’s face it: we’re great liars.  And by that I mean we are masters at telling ourselves stories that make us feel better about ourselves, that make us “right” and others “wrong”, and somehow magically portray us as having the perfect religion, the perfect eating habits and the perfect reactions in every situation.  Not true.  But it’s hard for us to see ourselves clearly through our self-induced haze of denial. 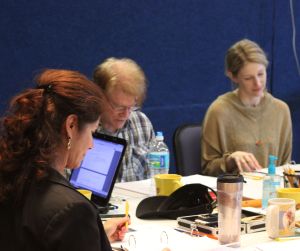 The First Read of THE BUTCHER

The other day we did a first read of The Butcher, our World Premiere by Gwydion Suilebhan.  By the end of it, one of our staff members was watching it through her fingers, hands covering her despair-riddled face.  When questioned about her response, she reported that she knew people who who would have behaved in just that way, even though, to some of us, the behavior of the character and the words he had spoken may have seemed vile, prejudiced or harshly judgmental. Nope, she confirmed, she knew people like that.

And so it follows:  if we can see people we know represented by characters onstage, can’t we see ourselves?  And maybe, even if we’re not willing to hear it at first, there will be a little voice in the back of our heads that says, “I do that.”  If we listen to it, and own up to it, we can transform.  And, like George Bailey and Scrooge and Dorothy and countless others, we can go on to positively affect others.  The first step is to be open to overcoming the “not me” syndrome.  Because, guess what?  It is you, too.  And me too.