Gwydion Suilebhan is the author of The Butcher. The Butcher was workshopped as a part of Gulfshore Playhouse’s 1st Annual New Works Festival and will be opening its World Premiere production at Gulfshore Playhouse on February 28th. Gwydion‘s work has been commissioned, produced, developed, and read by Centerstage, Ensemble Studio Theatre, the National New Play Network, Forum Theatre, Theater J, Theater Alliance, Active Cultures, and the Source Theater Festival, among others. In addition to his work as a playwright, Gwydion lectures and writes widely on the intersection between theater, the arts, and technology.

I am writing this blog post about ten days after I traveled back home to DC from Naples, leaving THE BUTCHER in the hands of my amazing collaborators at Gulfshore Playhouse, and I find myself daydreaming heavily about what’s happened since I left. I cannot WAIT to see what they’ve done while I’ve been gone. 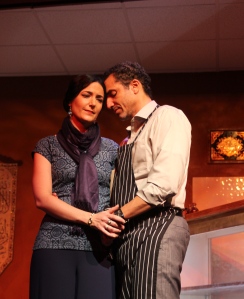 Done? That’s not a fair word, really. Discovered, I think, would be better, or perhaps created. By the time I left the rehearsal process, we’d all put the finishing touches on the script, but the script is just the score, not the music itself: the music is the performance, which they’ve all been deciding how to play while I’ve been gone. The play’s no longer mine now, or no longer only mine: it’s ours.

Returning to the theater after an absence like this is strange. Yes, I’ve been looped in to what’s happening in the rehearsal room while I’ve been home, but most of my mind has been focused on everything from finishing up some long-neglected projects to getting my four year-old to eat his vegetables. At this point, THE BUTCHER has undoubtedly become a bit strange to me: still the original story I decided to tell, of course, but also something more.

(My son felt like he grew two inches while I was away during the earlier part of the rehearsal period. And his vocabulary got shockingly more complex, too. It’s sort of like that.)

For some playwrights, that’s a scary thing, but I find it exhilarating. I’ve worked for so very long now—nine whole years—to make a play that’s big enough to survive on its own, in the world, in the hands of whomever might produce it, and I want it to succeed. I want it to be bigger than me. And in order to make sure that happens, I had to let go of it.I’ll always be its author—just like I’ll always be my son’s father—but it has to find its own way without me. I’ve done all I can for it now.

Well, almost all. I’m about to watch (and offer feedback on) three preview performances. At this point, though, I’ve become, like, 30% audience member, 70% playwright. And with any luck, I’ll be able to experience the play, to some extent, from the outside… and simply beam with pride.