Where Does the Time Go?

Kristen Coury is Gulfshore Playhouse’s Founder and Producing Artistic Director. She will be blogging on Saturdays throughout the 2014-2015 Season.

The overarching feeling I’ve been having lately is: is it March already? And here we are, sliding into April. We’ve had a great season here at Gulfshore Playhouse. One that isn’t even quite over, as we’re rehearsing our last show of the season The Liar.

And yet: we are already knee deep in planning for next season. For those of you haven’t yet heard, our season is announced: http://www.gulfshoreplayhouse.org/2015Season/2015Season.asp

I’m actually thrilled about this upcoming season for a 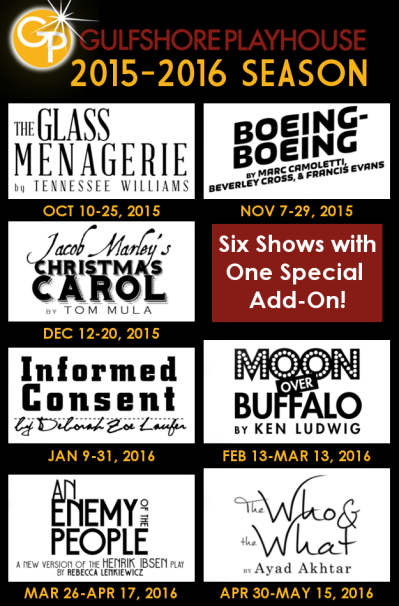 First, we’re doing a co-production of The Glass Menagerie with Weston Playhouse. Working with Steve Stettler and the team at Weston has been pure pleasure, and I’m honored to be able to direct this venerated classic both in Vermont and Naples.

We’re doing two huge comedies, both of which I know will be crowd pleasers.

We’re doing some incredible new plays AND a new adaptation of a play that I have loved for a long time: An Enemy of the People. Oh, how I love Ibsen.

Even more, we’re knee-deep in planning for the 15-16 season already: budgets, offers, design teams, you name in, we’re in it. I can’t wait to see how it all turns out.