Kristen Coury is the Founder and Producing Artistic Director of Gulfshore Playhouse.

Well, it isn’t every week that one has the pleasure of announcing a $10M donation, undertaking one’s most successful gala to date, starting rehearsals on a longed-for play and attending a private Billy Joel Concert. All the while fighting the flu.

Yes, that was my week, and, believe me, I have spent it counting my lucky stars, and thanking the people who’ve made this wonderful week possible.

First: Patty and Jay Baker. How can one begin to thank the Angels and Patrons that make a dream come true?? I have tears in my eyes (as I have had all week) as I write, with the full knowledge that there is no way for me to express in writing the gratitude that is in my heart, but let me say this: 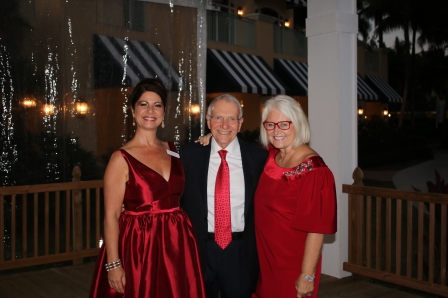 Kristen Coury with Jay and Patty Baker at the 2016 Bubbles, Baubles, and Broadway Gala.

It takes two extraordinary people to have the vision necessary to support a project in its early stages, when there is not even a teaspoon of land dug, not a picture drawn, not a room designed. Patty and Jay are two such visionaries. Not only are they theatre-lovers and arts patrons, but they’ve been instrumental in helping transform other organizations that also help and heal the world with everything from baseball to to business to healthcare. The world is a better place because they are in it.

And so it was my great honor to stand in their living room last Wednesday as they announced their matching donation of $10M to begin making the dream of creating our Tony Award-winning Regional Theatre come true. This moment was made even more magical by the unveiling of the cover of Naples Illustrated with their two beautiful faces on it, commemorating their transformative gifts that have been given throughout Naples over the last several years.

Monday was our incredible gala: Bubbles, Baubles and Broadway – Expect the Unexpected. Thanks to our crack General Manager, Chris Brislin, and the talented, hard-working, dedicated team at Gulfshore Playhouse, along with the indefatigable efforts of our Gala Co-Chairs and Committee Liz and Jim Jessee, Tennille Sevigny, Bunny Brooks, and Janis Siegel, the gala was an astounding success, and we raised more money than ever before! The evening was further illuminated by selling 15 ‘Golden Ticket” packages to the first opening night of the new Gulfshore Playhouse to 30 of our most ardent supporters. What an incredible vote of confidence, one that brought more than just a tear to my eye, to see that people believed in what we are, and what we do to serve our region so deeply, that they voted “yes” to our ability to raise the money necessary to build that building of our dreams, and voted “yes” to wanting to be there to celebrate it with us. How magnificent. I know I often throw the “founder’s card” into my blogs, but, seriously, for the person who started this organization in the back of her apartment, it is moments like these during which I am quite literally in awe of the wonderful people who’ve gathered round to support world-class professional theatre and unique educational opportunities for our region.

And then, on Tuesday, just 12 hours after the gala was over, we started rehearsal for “An Enemy of the People” the incredible adaptation by Rebecca Lenkiewicz, of the unforgettable Ibsen play. This cast is BRILLIANT and I cannot wait for you to come see it.

In the past twelve years that Gulfshore Playhouse has existed, there have been many UPS and many DOWNS, but this week will go down as a high point in the history of this arts organization, not to mention a high point in this little life.