Genevieve V. Beller is the Costume Designer for Constellations.

It is sometimes difficult to get excited about contemporary costumes because when they are done well they look like, well…clothes.  But not just any clothes will do. You may be surprised by how much more involved the process behind designing modern dress is than simply going to the store and picking something that fits. Prior to the opening of Constellations the costume department purchased 3 dresses, 9 shirts, 8 tank tops, 13 pairs of shoes, 10 pairs of leggings, 18 cardigans, 26 pairs of pants and two rompers. For just two costumes.  No, Kate Eastwood Norris and Cody Nickell are not portraying clothes hoarders. It’s all part of the process behind bringing a modern-dress multi-universe love story to the stage.

The action of Constellations takes place across myriad universes and realities – each with their own unique set of circumstances and outcomes. My challenge as a designer was to find clothing that felt true for each of these realities as well as for the various social occasions, life stages and personality changes the characters went through all without ever leaving the stage.

My process began in July as a conversation with director Matt Pfeiffer. He spoke of his vision for the piece and we brainstormed about how to achieve our artistic goals.  He suggested I look at the aesthetic of the recent Spike Jones movie Her. Set in the future, costume designer Casey Storm looked to the past for inspiration and omitted small details like shirt collars and belt loops to create a world that felt both familiar and abstract. Intrigued by this concept, I revisited my research library of historical dress. Instead of looking for what was different about the clothing of each period, I searched for what had remained unchanged. I identified garment silhouettes that had endured not just across the ages, but across geography and culture as well. For example: the t-shirt as we know it today dates back to the late 19th century but the T-shaped garment has existed largely unchanged since the advent of written records. Wrapped garments can be identified as cultural icons ranging from Ancient Greece to Mongolian nomads to Diane Von Furstenberg. A pair of what are essentially leggings dating back to the Roman Iron Age was recently unearthed in a German bog. These garments have endured despite seismic changes in culture and technology. It’s not much of a stretch to believe that they would exists across universes as well. 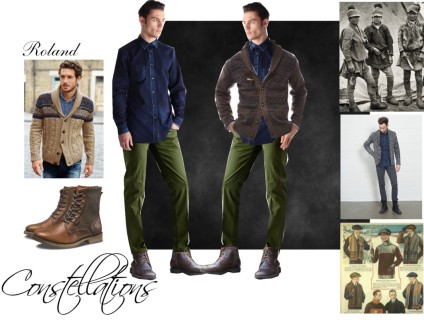 I had the concept behind my costumes. Next came the specific look, pattern and texture. David L. Arsenault’s chalkboard set prompted me to look for colors that would resonate against a dar
k background without appearing garish. It was also important that I chose a look that felt comforting and home-like. As Steve TenEyck’s lights and Evan Middlesworth’s soundscape rapidly transported us back and forth across space and time, the costumes would become the familiar touchstone grounding the characters. I settled on a look that included warm, contrasting colors in soft vintage textures and patterns. Kate’s dress, in particular reminded me of early 20th century wallpaper while Cody’s patterned sweater and denim shirt recalled both warmth and a working-man aesthetic.

Then I went shopping. After finding a selection of looks that fit the overall concept and design, I turned to my final two collaborators to help me complete the process. While I may have certain ideas about how a character thinks and feels, it is the actors who will be literally walking in their shoes. Which is why I had to buy over a dozen pair to find exactly the right fit both for the character choices and the actor’s needs. You will be relieved to learn that Cody and Kate did not have to try on all 90+ articles of clothing purchased for the show. Some pieces were duplicates or came in a range of sizes and colors. Others felt right in the store but wrong in the fitting room. What they did try on, they gave constant feedback on. Including fit, feel and movement.  I even gave them the option of wearing items for rehearsal to get a sense of how they worked in the context of the play. This collaborative process continued well into tech with final details (such as Kate’s infinity hair clip) being added right up until final dress rehearsal.

Constellations is a play about choices. Each choice that the characters make creates a different world where those choices are lived out and inhabited.  As a designer, each choice I make changes the reality of the play and influences the choices that each of my fellow artists makes in turn. The resulting performance is a singular world of our own making that we present to you.