Kristen Coury is the Founder and Producing Artistic Director at Gulfshore Playhouse.

My first sentence may conjure up images of pelicans and seagulls standing in a picket line holding up posters with incendiary sayings. But for those of you who’ve never seen the move Sully and haven’t heard the term, a “bird strike” is what they call the moment the plane hits a bird and it takes out the engine. This is what happened to me at the beginning of my eventful journey. Just at the moment of take-off from Fort Myers my plane hit a bird, the pilot slammed on the brakes, successfully ruining the brakes and the tires, and we deplaned on the runway. 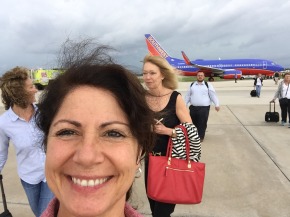 Kristen deplaned on the runway en route to Portland.

24 hours later, I finally made it to Portland, Oregon for the TCG National Conference. For those of you who aren’t familiar with TCG, it stands for Theatre Communications Group, and I am a proud member of the Board of Directors. TCG’s mission is to strengthen, nurture, and promote the professional not-for-profit American theatre. It’s a great opportunity for fellow artistic directors and managing directors to gather, share, and learn from each other and from the many educational opportunities TCG has to offer during this four day conference.

This year I had the pleasure of creating and moderating a “breakout session” entitled “Not-so-Urban Legends” about what it’s like to make theatre when you’re not in a major market. Three other artistic directors participated in the panel, and together we shared tips, challenges, and solutions in hopes of sparking similar solutions for the attendees.

At Conference End, I flew all night to Saratoga, New York, to attend the graduation of my eldest niece. And then it was on a train to New York City for auditions. I’m always happy to spend a few days with our incredible Casting Director, Michael Cassara, and work with fantastic creative talents like Laura Maria Censabella, the playwright of our regional premiere Paradise, and Dan Knechtges, the Tony-Nominated director of Ken Ludwig’s Leading Ladies. We found fantastic actors for the first half of our season, and plans are beginning to solidify.

Amongst the auditions, there was a spate of theatre-viewing. What a spate it was. I got to see the shows that won both best director for a play (Indecent), and a musical (Come From Away), as well as the Tony-winning play (Oslo) and musical (Dear Evan Hansen). I cheered for Come From Away, cried with Evan Hansen, and was blown away by Oslo, a play about the Oslo Peace Accord. The actors were brilliant and the script was fantastic. I wouldn’t be surprised if you see that on the Gulfshore Playhouse stage in our future. 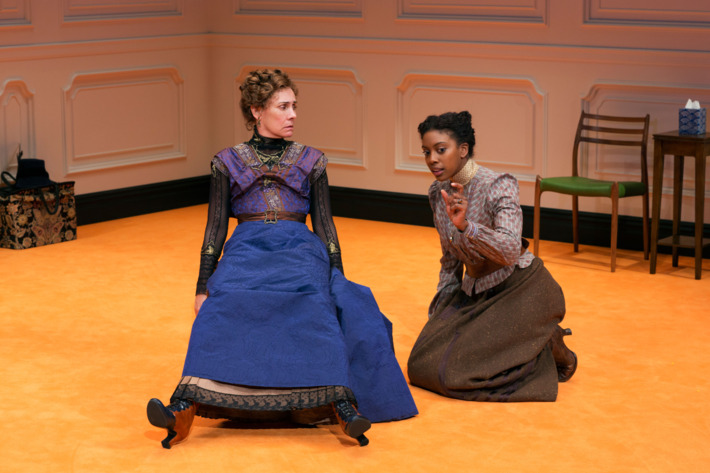 Laurie Metcalf and Condola Rashad in A Doll’s House, Part 2.

Another Playhouse fit, was Lucas Hnath’s A Doll’s House, Part 2. After having directed The Christians, also written by Hnath, I was excited to see this imagined sequel to Ibsen’s A Doll’s House. It did not disappoint. A dismantling of societal ideas on marriage, and divorce, and gender equality, it made for an interesting, compelling, and surprisingly moving piece of theatre. Laurie Metcalf’s Tony win was very well-deserved indeed.

And finally: HAMILTON. Yes, I finally saw it. And I had done a fabulous job of hiding my head in the sand with regard to learning anything about the show. I avoided soundtracks, documentaries, YouTube videos, and every article on Playbill in an effort to see it was as fresh eyes as possible, which I finally got to do last Tuesday night.

I will just say this: it was worth the wait. And it deserves every ounce of the hype and more. I need say nothing more, it’s all of it been said, but the cohesiveness of the vision, the clarity of the story-telling, the absolute stunningly beautiful visual beauty of the dancers, and the break-the-mould angle on casting made for an evening that had me laughing and crying, sometimes at the same time. I expected a “hip hop musical” but there are a variety of musical styles, and some of the songs are incredibly gorgeous and heart-wrenchingly beautiful. GO SEE IT! You have time. It will likely run forever.

5 thoughts on “The Bird Strike”