Audrey Zielenbach is the Artistic Content Curator at Gulfshore Playhouse.

The Price opens this weekend at Gulfshore Playhouse. While perhaps not Arthur Miller’s most well-known work, we certainly consider it among his best. The Price is an intimate and immediate drama that strikes at the heart of familial relationships throughout time.

As a dramaturg, I have the joy of getting to learn all about the plays performed on the Gulfshore Playhouse stage. We produce plays written in sixteenth-century England, eighteenth-century France, twenty-first century America, and everywhere in between. This means I get to study the lives of great playwrights and help the actors and director understand the world they inhabited.

Context always informs the way a play is written as much as it informs the way we read a play. The way we view a subject in 2018 is completely different than the way someone might have viewed the exact same thing 100 years ago. Although our world looks very different from the world of Shakespeare, Moliere, or Miller, some things truly don’t change.

In fact, Arthur Miller said it best: “My plays are always involved with society, but I’m writing about people, too, and it’s clear over the years that audiences understand them and care about them. The political landscape changes, the issues change, but the people are still there. People don’t really change that much.” 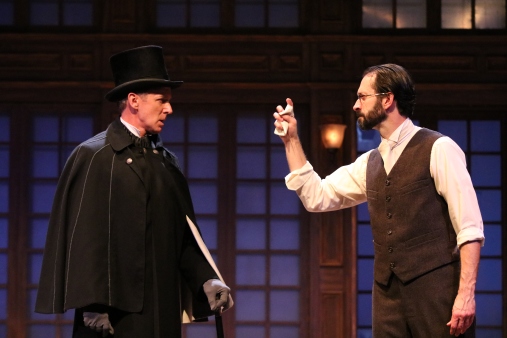 David Whalen and Jeffrey Binder in An Enemy of the People (2016). Both will star in The Price.

This message is at the heart of The Price, and it is the reason that this play, though written 50 years ago, in many ways feels like it could have been written just last week. Miller explores the capriciousness of society versus the stasis of human nature. In The Price, the furniture appraiser, Gregory Solomon, explains that a beautiful dining table purchased by Victor and Walter’s parents in the 20s for a hefty sum is now worth significantly less because modern apartments have smaller door frames. In another 30 years, that very table might become a priceless antique. Meanwhile, Victor and Walter are stuck in a decades-long unresolved conflict which has not shifted with the times.

Our values change, our circumstances change, our language evolves, but human emotion remains a constant in this sea of uncertainty. Miller understood this which is why his plays, out of all the thousands that have been lost in time, are still so resonant with us today.

As we come close to finalizing our 2018-2019 season, the timeliness and timelessness of a play are at the forefront of the Artistic team’s minds when selecting what we want to produce. This is why we choose plays like An Enemy of the People (which also starred Jeffrey Binder and David Whalen as warring brothers) The Merchant of Venice, and My Fair Lady; all of these great works share this unique quality.

While a cynic may point out how little we seem to have learned from our past, it is also a point of connection between us and every person who walked this earth.

When you come to see The Price, and I strongly encourage you to do so, I invite you to reflect on the timeliness and the timelessness of the play, how your values have shifted, and what has remained constant for you.

One thought on “Timely and Timeless”