Emily Hauger is the Company Manager at Gulfshore Playhouse and the Production Stage Manager for Scapino.

Today’s blog post is a day in the life of me – Gulfshore Playhouse Company Manager and Scapino Stage Manager Emily Hauger. As Company Manager, I take care of all of the travel, housing, and transportation for all of the visiting actors, designers, and directors. As Stage Manager, I am responsible for the scheduling of rehearsals, the writing of blocking during rehearsals, and eventually overseeing the execution of lighting and sound cues during performances. Typically, these are two separate jobs. But, I’m lucky enough to get to do both with the help of the Company Management Intern Makenzie Hinrichs and Scapino Production Assistant Dana Katz! Here’s a brief glimpse into how we make the magic happen every day!

6:30am – Wake up (I’m an early bird!) and check emails. There was a performance the night before so I check the performance report for anything that needs my immediate attention. Thankfully, there’s nothing. I scroll through the rest of my emails, but there’s nothing pressing.

I then check on a flight status. The Scapino Costume Designer is arriving this morning from Chicago so I check to make sure her flight is still on time. It is! Company Management picks up all our visiting artists from the airport so we are frequently checking flight statuses on arrival days and adjusting our schedules accordingly. Makenzie will be picking the designer up later today, and thankfully, there’s no schedule change needed this time! Onward to breakfast!

8:20am – Dana and I arrive at the rehearsal room to prep for rehearsal. She prints out copies of the daily schedule to hang up on the callboard and for the director and I to have at our desks. She and I also discuss our prop needs. There’s a lot of fake money used in the show, but the props department is still making it. Dana cuts up some scrap paper and tapes it together to make some fake stack of money for rehearsal purposes – it works great. Meanwhile, I continue through emails. The costume shop manager has requested that several actors come in for a fitting in the coming days. I respond to her and let her know who I’ll be able to send to her and when.

8:40am – One of the actors arrives. We discuss how nice the cool weather is. It’s a welcome break from the heat for us Northern folks!

I then email our apartment cleaners to remind them of upcoming cleanings next week. The actors are housed in various rental apartments around town, and each time guest artists leave, we have the apartments professionally cleaned before new guest artists move in.

9:00am – Rehearsal begins! Today we’re starting by working on Geronte’s monologue in III.3. Each day, it’s my job as Stage Manager to work with the director to create the rehearsal schedule. Based on what we need to work, we call different actors at different times throughout the day. Sometimes, the whole cast will rehearse the entire 7 hours, and some days some of the actors may not even be called to rehearse.

After the monologue work, we added in the other actor in that scene and worked the entire scene. We’ve already blocked the scene (meaning the actors know where and when to move onstage), but now we’re delving deeper into character work and the meaning of specific phrases. 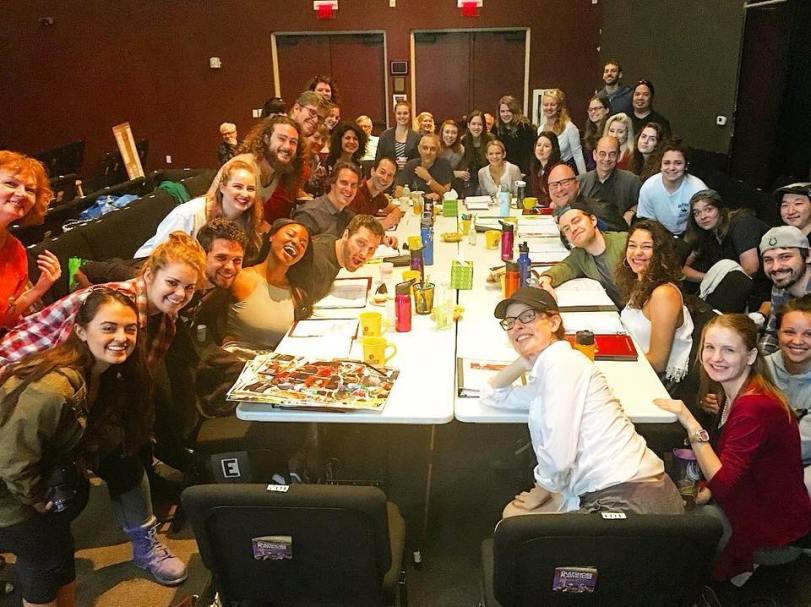 The cast and crew of Scapino and Gulfshore Playhouse staff at the first read!

10:00am – The rest of the cast arrives. We’re scheduled to do a work-through of the entire show, which means we try to run as long as we can until we need to stop. We run until Act II Scene 2 finishes, and then we stop to discuss everything we just did. It was our first time putting that much of the show together, and it went spectacularly well! After discussion, we ran through the remainder of Act II until we hit the intermission break (the show has 3 acts, and intermission is after Act II). We then had a bit of discussion about how that part went and developed a list of scenes we’d like to work after lunch.

1:30-3:00pm: We take a lunch break at rehearsal. I correspond with a departing actor from The Price about his travel arrangements for his upcoming departure. Makenzie will be driving him and the other visiting actors to the airport for their departure in a couple days. I then check in with Makenzie about some flights she’s booking for Miss Keller (we’re always working ahead!).

We end rehearsal a bit early so we can do some cast bonding. The director suggests we all go to a local restaurant. Developing trust, communication, and strong bonds among a cast is very important, and it’s particularly important for an ensemble based show like Scapino. We have a lot of fun and great conversation.

I head home after about an hour so I can get to work on writing the rehearsal report and next day’s schedule. Every night, the stage manager sends a report to all the designers of the show and staff of Gulfshore Playhouse. This report is the way we communicate about any needs the show has. In his particular report, I request an additional gag cloth from props to use on two show days, a different sized fanny pack for an actor from the costume department and ask if it’s okay for one of the character’s wigs to get sprayed with fake hairspray (water).

I also type up the schedule for tomorrow’s rehearsal. We’ve got a lot of little detail work in various scenes so everyone will be called all day so that we can easily move from one thing to the next. Quite the easy schedule compared to days when I need to schedule vocal work, scene work, and costume fittings!

8:15pm: I send the report and schedule off, and then do one final email check for the day. All is well, and the day is over! Can’t wait until tomorrow!