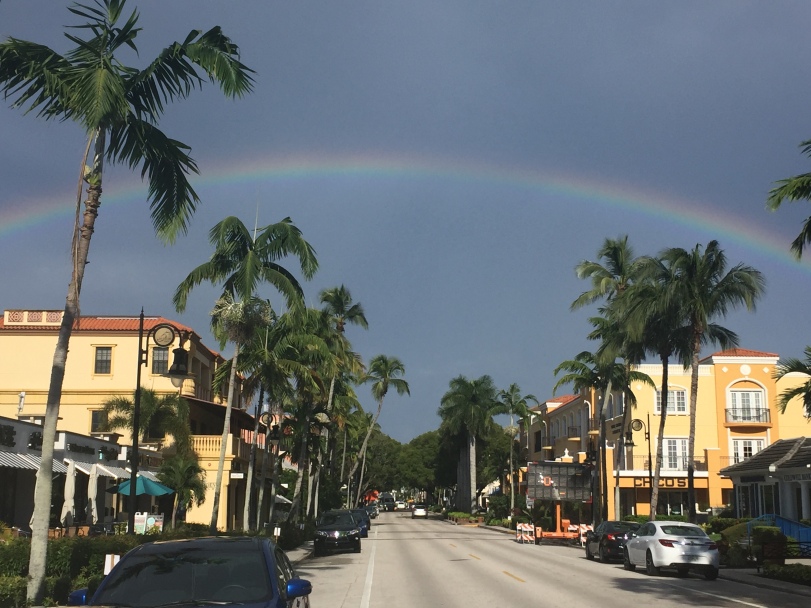 When I left Naples after the New Works Festival in September 2016, I did not know if or when I’d be back to Gulfshore Playhouse. I live in Los Angeles (the other west coast!).

But when I got the news that my play “Miss Keller Has No Second Book” had been selected for production, my mind immediately went to the last image I had in my mind of Naples: a rainbow over 5th Avenue which ended right at the Norris Center. I’m not kidding: you couldn’t have asked a scenic artist to paint anything more perfect, especially after the storm.

The last day of that New Works Festival, that storm had knocked out power to the theater at the Norris Center the morning of my play’s reading, and y’all, it was HOT in that building. But no one was daunted! So many people showed up for that matinee reading that the theater was full. And when the reading started (industrial fans blowing warm air around the room), everyone just leaned in and became caught up in the story that the amazing actors were telling. That story that I had made up in my little head on the other west coast. That story that was so personal to me, so precious, so new and fragile.

Then, halfway through the reading – miracle of miracles – the power kicked back in in every possible way. The energy in the room quadrupled, from the actors to the audience and back to the actors. Everyone in that room came together to create and experience theater that far exceeded what I had had in my head months earlier. When I left town, I knew the value of the gold at the end of that rainbow – it was the powerful validating sense that my new Naples friends were rooting for me, for my play, for Gulfshore Playhouse, and for the healing art of theater.

When I was due to arrive for the pre-production workshop last fall, Hurricane Irma beat me to Naples by twelve hours. I was glued to the news, racked with worry about the wonderful people I’d met and the theater I wanted to occupy. But after that storm came another rainbow. My friends’ resilience was stronger than ever, as was their hunger for good storytelling. I finally arrived in March to begin mounting the first production of my play. And I’m so proud of the work we have done together as a team and as a community. (Plus, we had SO. MUCH. FUN.)

Now, at the end of the very first run of “Miss Keller Has No Second Book” (but not the last!), my pockets are filled with the metaphorical gold of knowing that so many wonderful, talented, generous people are still rooting for me, for my play, for Gulfshore Playhouse, and for the healing art of theater. Now I leave Naples with a big smile, knowing I’ll be back someday. I have to be – my friends are here.