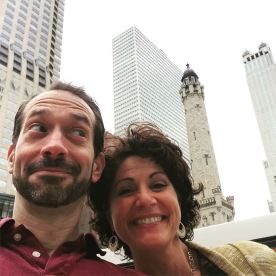 Jeff and Kristen in Chicago

When people speak about something being a “whirlwind,” I imagine something happening at great speed in a short amount of time — so quickly it’s a blur before their very eyes.

Despite the fact that my most recent trip lasted a week all-told and felt like a month in total, each segment was very different in character, content, and “blur-factor”, and lasted only 2-3 days each. It was indeed a whirlwind tour.

I left my home in Naples at 4:30am on Wednesday morning. I arrived in Chicago and was picked up by one of our beloved board members Jack Nortman who took me on a grand tour of the Windy City where I had previously only been for three days, so I knew very little. Included in our field trip was the Botanic Gardens where we soaked up some inspiration for our future project in terms of landscaping and design. I dined with dear patrons and friends who haven’t been in Naples all summer and looked forward to the theatre tours ahead.

Jeff Binder, our associate artistic director, arrived the next day, and the tours commenced. We started at Writers Theatre in Glencoe, just north of the city. Many a patron has told me about the similarities between Writers Theatre and Gulfshore Playhouse. We are both located in small, art-loving towns; we both produce thought-provoking work; we both have or had theatre-building aspirations. In the case of Writers, I’m proud to say, they have actually FINISHED their building project and have been producing work and serving patrons for more than a year already.

The Executive Director of Writers is Kate Lipuma with whom I serve on the board of the Theatre Communications Group. Kate gave us a fantastic tour; she was extremely thorough, explaining all the reasons behind their choices. She let us explore, ask questions, and was otherwise a font of knowledge. This may not sound useful to you, but touring another theatre, and learning things like how many washers and dryers they have, what the pros and cons of their seating configuration may be, what they’ve learned about programming in the new space, and whether or not they have a stove in the green room 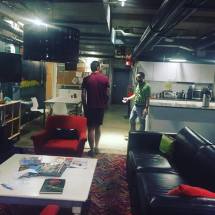 Behind the scenes at Steppenwolf.

are all helpful tidbits as we proceed through this wonderful project ahead.

The next day we toured Steppenwolf, AND The Goodman Theatre, two of Chicago’s most revered theatres, where we learned just as many interesting things before we headed out of town.

Many of you are aware of our association with Tony Award-winning producer, Ken Davenport. You may not be aware that aside from producing his own projects on Broadway, Ken has created many different ways for people interested in producing to gain more knowledge, network, and test the waters with their projects. Every year he hosts a producing conference, the Producer’s Super Conference, he writes a blog called The Producer’s Perspective, and he has a small group of highly-motivated individuals called “The Inner Circle.” I am a member of “The Inner Circle”, and for the last meeting, I brought Jeff as a guest.

We listened to all the other participants’ projects in progress, we listened to incredibly inspirational speakers such as Tony Award-winning director of Wicked, Joe Mantello, and the book writer of Jersey Boys, Rick Elice, and we outlined the plans for our project: to do a New York reading of Jeffrey Binder’s Scapino, which became the highest grossing show in Gulfshore Playhouse history. Hosting a reading in New York will engage other regional theatres and license holders in the work, as well as garner interest in and support of a commercial New York run. Everybody needs a good laugh, now more than ever, and this hilarious mafia comedy, based on a tried and true classic by Moliere, is a crowd pleaser for sure. We know that already, so we’re one step ahead.

Ken gave us GREAT advice, we thought up some great ideas ourselves, and we are on the move! If any of you are going to be in New York City on December 3rd, let us know and we’ll make sure you’re on the list for the reading of Scapino at the Davenport Theatre.

By the time the weekend was over, it felt like we had left Chicago a month before, and that we had been away forever. However…

Jeff, Kristen, and Joel at H3 Headquarters in NYC!

Still in New York, we spent the next two days around the table with some of the most creative people I have ever seen at work – our fantastic lead architects from H3, Ariel Fausto and John Fontillas; the most knowledgeable man in theatre, our theatre consultant, Joshua Dachs; our acoustician, Russell Cooper; our project managers from Pizzuti; and the guy who moderated it all? Steve Wolff from AMS Planning and Research.

Joined at this stage by our new Managing Director, Joel Markus, the three of us from Gulfshore Playhouse proceeded to ask and answer questions, discuss, probe, seek clarity, make hard decisions, and get inspired by all the people around the room. This was two days designed to align the budget and scope of the project, which is never easy, especially in this era of extraordinary escalation and the rising price of steel (all words and phrases I never thought I’d use when I became a theatre maker).

The result was a collaborative, productive, and illuminating meeting where we all got on the same page, began to explore what the theatre would actually look and feel like and WHY, and really get down to the nitty-gritty in terms of pricing and cost estimates. It was stressful, insightful, creative, and full of good information. We emerged with a larger sense of the “WHY” and the “WHAT”, and we are armed with a host of next steps. We are currently in what is called “the quiet phase” of fundraising, so don’t take it personally if you’re not hearing “big news” very frequently. Rest assured we’re hard at work, and we’re talking to people one at a time to assess their level of interest in our success. If you’re one of those people – someone interested in supporting the creation of a Theatre and Education Center in downtown Naples, don’t hesitate to contact me. I’ll leave the light on.

One thought on “The Whirlwind Tour”