Hey! Marina Shay here from the cast of The Revolutionists! I’m gonna chat a bit about our play, the French Revolution, and my character, Marie Antoinette.

The Revolutionists is packed with the untold stories of women in the French Revolution who lost their lives speaking out with words, or knives, about what they believed in. Some of these women were mostly (if not entirely) written out of history. It has been awesome to be a part of the process that gives them a voice. It’s a bold, funny, and extremely powerful piece. We have a fantastic cast and nearly all-female design and production team, led of course by Producing Artistic Director Kristen Coury. It has been an excellent space to give life to this play.

I play Marie Antoinette, who, as we all know, was not forgotten by history, but perhaps 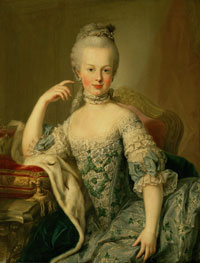 somewhat misconstrued by history. So I think I’ll take this space to set the record straight on a couple of facts we think we might know about Marie.

It’s true that she wasn’t a great Queen. She did spend a lot of money on her beloved weekend retreats at Le Petit Trianon and 8 million livres on a summer Chateau. She also gambled, partied, and wore extravagant dresses and hairstyles (which was expected of her as the Queen). But the money she spent alone wasn’t nearly enough to run France into the ground. France was already deeply in debt when she and Louis XVI came to power, and Louis XVI put the icing on the cake (pun intended) when he chose to send funds to the Americans to support their revolution, which really is the only reason we have freedom from Britain today. Without the money from France, the Americans would have never have won the Revolutionary War. France accumulated over 1.3 billion livres of debt from aiding the Americans in the war. It’s almost literally as though France injected its own life force into the baby United States of America, and in doing so, nearly dissolved itself.

But Marie herself, although not a great queen, is kind of a puzzle. She’s a bit of a contradiction in history. The French disliked her because she was Austrian and they had just finished fighting a war with Austria. There’s evidence of her giving money to charities and giving money for her children’s holiday presents to the poor. Although, I’m sure she could have managed to find more money somewhere to buy her kids presents. And there are a lot of resources that say she was deeply concerned about the well-being of her people and country and was doing everything she could to reduce her spending. Whether she actually did is another question.

But the point is that she was much more of an ambiguous figure than she was a downright villain. More than anything, she was in the wrong position at the wrong time, and she totally dropped the ball. She was obviously ill-equipped to handle any monarchy, let alone a monarchy in an era of so much turmoil and building revolutionary forces.

And she definitely never said “let them eat cake.” That was probably the wife of King Louis XIV, who said it 100 years earlier, and it was first recorded by Rousseau when Marie Antoinette was 9 years old. So there’s no way she could have said it!

That’s my rampage of fun facts! Wikipedia is great if you wanna learn more! Hope you enjoy our hopefully powerful and outrageously hilarious play 🙂