2D to 3D, The Revolutionists and The Real Housewives

Hi there! I’m Angie Janas, one of the four badass ladies of The Revolutionists here at Gulfshore Playhouse and I’m playing country girl-turned-assassin Charlotte Corday. When Producing Artistic Director/The Revolutionists director Kristen Coury asked me to do this play, I immediately jumped at the opportunity. I only knew a little about the play and Lauren Gunderson (the playwright), and I knew even less about the French Revolution and Charlotte Corday (who was a real person). BUT I was super excited by the idea of working on a play written for women, by a woman, also directed, stage managed and designed by women. Even in 2019, that doesn’t happen much, and I didn’t want to miss my chance. And FYI, despite all of the women involved, this is definitely not a chick play. It’s a human play.

When we started rehearsals a couple of weeks ago, two things became immediately clear.

One of the specific challenges we came up against was the very first scene of the play. In the first fifteen minutes, the audience is introduced to all four of the characters—Olympe de Gouges, Marianne Angelle, Charlotte Corday and Marie-Antoinette. The comedy in this first scene is very big, broad and goofy, and all of the characters have an archetypal quality to them. For instance, my character Charlotte comes barreling into the room, yelling loudly and aggressively that she “needs a line.” 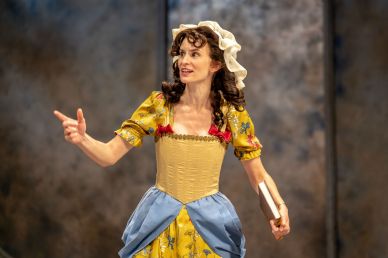 She is the embodiment of the “hyperbolic, angry-yelling” revolutionist that Olympe describes in the very beginning on the play. BUT as the play continues, you see more and more of Charlotte and all of the women. You see all of their eccentricities and fears and, ultimately, you see the truest versions of them—rather than the versions they present to the world or the versions that the world has imposed on them. During the rehearsal process, it became really useful for me to think about Charlotte as going on a journey from being two-dimensional to fully 3D. All of them start out as clearly identifiable characters, almost stereotypes; but as the play unfolds and the revolution gets crazier, you get to witness real deal, three-dimensional women trying to survive.

SO now, my dear blog readers, I’m going to make a little confession to you…I am a secret lover of The Real Housewives reality shows. I know what you’re probably thinking, “GASP,” just like our Marie-Antoinette would say, “but those shows are TRASH.” But hear me out on this one… I’m a fan of these shows because you’re introduced to women who may appear to be 2D but who actually have SO MUCH MORE going on, AND they are in charge of their own narrative. They are complex, intelligent, gutsy, sexy, kind, cruel, ambitious, raw and real. And hey, I’m certainly not the first person to argue that The Real Housewives is feminist, just google it!

So what does The Real Housewives have to do with The Revolutionists?! Well, nothing…and everything. Obviously, The Revolutionists is NOT a reality show and thankfully we have expert playwright Lauren Gunderson guiding the action of our drama instead of producers and cameras. BUT The Revolutionists is an exciting and still shockingly rare opportunity to see women in all their three-dimensional glory—at the messiest and at their most brilliant—and you get to see it right in front of you instead of on a screen.

One thought on “2D to 3D, The Revolutionists and The Real Housewives”