Kristen Coury is the Producing Artistic Director at Gulfshore Playhouse.

It’s been a wonderful, wild season here at Gulfshore Playhouse!  We have been on a roller coaster ride since last August, so it seemed like a good idea to share a “year in the life.” Imagine me running between these tasks: running the company, attending creative sessions with architects, meeting with donors, strategizing our future, attending City Council meetings, focusing on marketing and branding, attending committee meetings, building planning meetings, weekly updates, bi-weekly updates, updates on the updates, writing letters and hand-written notes to our generous sponsors and donors, and, most importantly, MAKING ART! 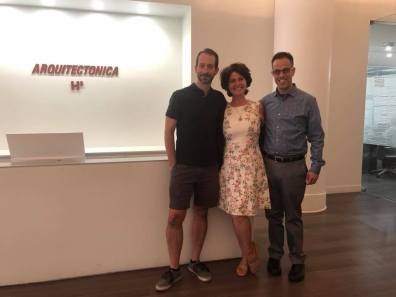 August 2018 saw the arrival of our new Managing Director, Joel Markus, and then we all jumped into our Teen Conservatory production of The Secret Garden! Then came a whirlwind adventure away from home. Jeff Binder and I toured several theaters in Chicago. We then met up with Joel and our videographers, Lancit Digital Media, in New York City for a meeting of the minds. With our architects, H3/Arquitectonica, and team of consultants, we discussed cuts and expansions as we commenced schematic design on our new Theatre and Education Center.

In September, we produced our second presentation of Starcrossed at Artis—Naples. We have partnered with The Naples Philharmonic and Collier County Public Schools to present a fully-orchestrated Shakespeare adaptation FOR FREE to the entire 11th grade of Collier County. Starcrossed is based on Romeo and Juliet; this year we’ll be creating Shipwrecked, which is based on The Tempest. These performances feature Equity actors and the full Naples Philharmonic!

Our New Works Festival was a big hit with three plays written by fantastic women from all over the country. October, November, and December were a blur as I directed An Iliad and we mounted our second full-scale musical, a zany and outside-the-box rendition of A Funny Thing Happened on the Way to the Forum. This production reunited Darren Katz, formerly a resident director of The Lion King on Broadway, choreographer Adam Cates, who, in addition to his Broadway credits, choreographed our production of My Fair Lady, music supervisor Matt Aument who also music directed My Fair Lady, and a fabulous cast of Broadway actors. Dria Brown and Shannon Marie Sullivan in The Revolutionists

I began 2019 directing The Revolutionists, the wonderful new play by the country’s most produced playwright, Lauren Gunderson. This play, which was equal parts French Revolution and Sex in the City, was a joy to create. The chance to work with an all-female cast and nearly all-female creative team was, sadly, unusual and, happily, great fun.

February and March flew by as this is the height of our season. During these months, we saw Jeff Binder’s directing debut with In the Next Room or the Vibrator Play. We broke out big with our Havana Nights-themed Gala. Thanks to our chairs, Barbara and George Franks, and all the generous souls in the room, we bested all our previous records and raised over $1M for our Annual Fund for Artistic Excellence! Many of you may not realize that ticket sales only cover half of our budget, and as we grow it becomes more important to rely on donations from generous individuals so that we can continue to offer affordable tickets, New York-quality professional theatre, and fantastic educational programs for our region’s youth.  This year alone over 90% of our education programs were provided free of charge to those who received them. That might not mean much, but when you realize we served over 12,000 people this year through Gulfshore Playhouse Education, it means a whole lot! 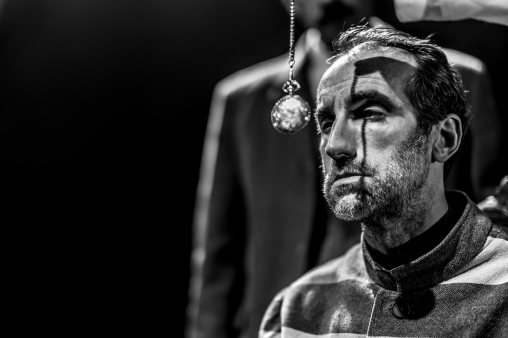 Gregory Johnstone in Holmes and Watson

On May 21st, the baton was passed from our longtime Board Chair, Bob Harden, to our new Chair, Steve Akin. To find the words to thank Bob Harden for fourteen years of service is nigh to impossible, but suffice it to say we wouldn’t be where we are today without Bob’s support, focus, passion, help, and guidance along the way. We are pleased that he will remain an Emeritus board member and serve on several committees going forward. We are thrilled and delighted to welcome Steve Akin as our new Chairman. Steve has an incredible background and has already been doing a fantastic job chairing our Capital Campaign, so we know that a bright future is assured under Steve’s leadership.

We finished out the season strong with our productions of Holmes and Watson and Skylight, put the period at the end of the sentence with our Teen Conservatory production of Macbeth, and are already working hard on next season: creating show art, choosing the creative teams, and going to New York for auditions. Next week, we’ll also be taking our first NYC Theatre Trip with an exclusive group of 16. Together, we will eat fine food and see great theatre including Hadestown, To Kill a Mockingbird, and Frankie and Johnny at the Clair de Lune. 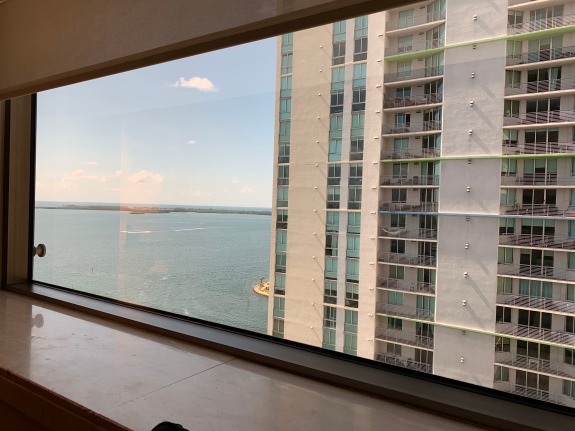 But today I’m in Miami. Here’s a picture taken from the desk as I write to you. Many of you may realize I am on the board of the Theatre Communications Group (TCG), the national service organization for professional theatres across the United States. I am pleased and proud to serve this organization that does so much good from supporting the next generation of theatre-makers to offering support, creating networking opportunities, and advocating for the arts whenever and wherever possible. Today begins the National Conference, finally held in our area (last year was in Portland!), and I am honored to have been asked to speak about our growth for the Artistic Director’s Summit this afternoon. This sojourn to Miami was made even better by meeting yesterday with our architects to begin talking about details and tweaks to the building as we are now firmly in the middle of Design Development.

I hope this has given you a little bit of insight into what it’s like to run a thriving, solvent, happy Professional Theatre. I am blessed to have a GREAT team of people around me, both on staff and on our Board of Directors, as well as generous patrons and supporters who believe in our mission. So, as I end this blog, it is with a great big expression of gratitude to all of you. Gulfshore Playhouse turned 15 years old on May 21st, and without you none of this would be possible. I thank you from the bottom of my heart.

One thought on “Greetings from the National Professional Theatre Conference”