Jeffrey Binder is the Associate Artistic Director at Gulfshore Playhouse.

I can’t put into words what an incredible time we had at our first annual Gulfshore Playhouse New York Theatre Trip. Well, alright… I’ll tell you. It was an incredible time. I say “First Annual” because after the exciting success of this first foray with some incredible patrons (and patrons-to-be) into the wilds of New York to experience everything the NY theatre scene has to offer, I can tell you with confidence that we’re already talking about what we’re putting together for next season’s trip!

It started with a meet-and-greet at our hotel, the stately and beautifully appointed Michelangelo Hotel in Times Square, so that we could all get to know one another and talk about expectations for the weekend. We also had a sit down with our first illustrious guest of our trip, NYC Casting Director Michael Cassara, who talked to us about what it’s like to be a New York casting director, how he became one, and all sorts of anecdotes that only Casting Directors in New York would have. The first evening included a delicious dinner at Oceana, just a short walk from the hotel! Dinner was eaten, wine was imbibed, songs were sung, stories told, and we were all primed for a most excellent weekend. We were reminded to meet in the Lobby bright and early the following morning for our first theatrical checkpoint of the trip – a tour of Lincoln Center!

The group at Lincoln Center

Early the next morning we headed uptown to explore the multiple spaces of Lincoln Center for a private tour. Some highlights included a serenade by some touring choral students in the symphony space, watching a bit of tech happening for an Opera set in the Deserts of New Orleans (what the what?), and a tour of LCT3 by architect Ariel Fausto – who was not only helped design that illustrious space but also happens to be one of the exceptional architectural minds designing the new Gulfshore Playhouse. Then lunch at the famous Fiorello’s across the street where I engaged in one of my favorite activities, eating, and then a few hours for folks to explore NYC on their own (and maybe buy some clothes and stuff) before a DELICIOUS dinner at dbBistro. We had a good time but didn’t linger, because we were all eager to get to our first show of the Gulfshore Playhouse theatre trip – HADESTOWN.

We were thrilled and floored by the talent and energy Hadestown. Truly a deserving Tony Award Winner for Best Musical this year (and one that also happens to be produced by our very own Gulfshore Playhouse Board Member Sandi Moran). What made the evening extra special was that my friend Patrick Page (who plays Hades in the show and was a Tony Nominee for his exceptional performance) stopped by the have drinks with us across the street at Hurley’s and talk about the show and his experience with it. What a day! 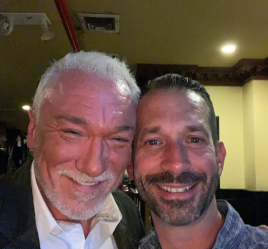 During some free time on Saturday morning, folks enjoyed the Highline, saw a matinee on their own, or simply walked Central Park and enjoyed the city. We all met up again with Gulfshore Playhouse favorites Maureen Silliman and Bill Parry (both Broadway actors with long and exciting careers) and Christian Parker (one of my friends from the old days, Chair of the Theatre Department at Columbia, and the director of our wonderful production of Skylight this past Spring) who gave a talkback to our group about theatre, their careers, and their experience as NYC established professionals. Then it was on to some incredible Asian fare at Hakkasan and back to the Broadway to catch Frankie and Johnny. While is was thrilling to see such wonderful actors as Audra McDonald and Michael Shannon tackle this Terrence McNally gem from the 1980’s, our experience was much more complicated with that production than it was with Hadestown, as evidenced by the lively discussion we enjoyed late into the night back at the Michelangelo. What a perfect way to spend an evening – seeing some theatre and then having some drinks with friends having a heated discussion about it! I went to bed all warm and fuzzy.

Our final day was a phenomenal decadent icing and cherry-on-top ending to an artistically delicious outing in NYC. After a brief gathering in the morning to chat about Kristen’s and my experience in NYC as professionals in the business, we headed to Blue Fin for a nice brunch and final bonding with our NYC troupe. Then off we went for our final show of the weekend – To Kill A Mockingbird (another Playhouse connection here – this one is produced by Board Member and Benefactor Patty Baker!). Jeff Daniels and the cast were exceptional – a very powerful production. I can’t think of a better way to walk out of a theatre than seeing our entire group with smiles on their faces having journeyed together through an exceptional piece of theatre… kinda like being at a Gulfshore Playhouse performance (wink, wink).

It’s not just the things you do, but the people you do them with that make outings like this special and memorable. We were gifted with such a lively, fun, funny, interested, happy, intelligent group of folks. Each leg of it was exciting, fulfilling, and an experience worth remembering. I am lucky to be a part of a community like Gulfshore Playhouse, that brings together people with a passion for the arts. It was great to spend such a fulfilling and memorable weekend with them. I guess it only brings one thing to mind for me: When can we do it again?