We Knew We Had Created Something Special 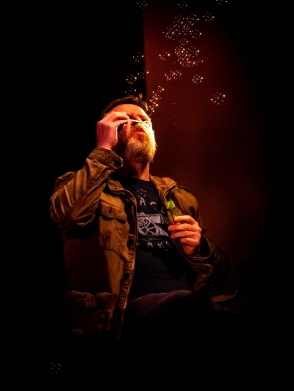 The first reading was held in my old apartment on 103rd street in Manhattan. It was myself as well as the rest of the original Bedlam four—Eric Tucker (also the director), Andrus Nichols and Tom O’Keefe. My dog Sammy was also present but he might have been asleep. What cared he that New York theater history was being made? He was old and nothing ever really impressed him very much. Aside from Andrus, who obviously played Joan right from the beginning, the roles for the three guys weren’t quite set yet—particularly O’Keefe’s and mine. A couple of those would be switched and then cast before the first rehearsal a short time later.

We rehearsed for two months. The first month was off the books, sitting around tables in coffee shops and apartments, caffeine in hand, going over the history and picking our way through every line of the play so that we understood everything we were saying. The second month was spent in numerous low-cost rehearsal studios, putting it all together while around us through paper-thin walls, actors hammered out their Mamet for scene study, singers belted their audition pieces and dancers sweatily stomped through their routines five-six-seven-eighteen times.

And so, in this way, Bedlam’s SAINT JOAN was made.

We opened at the Access Theatre, a tiny space on White Street in Tribeca with a single dressing room no bigger than a restaurant bathroom— which all four of us shared. First preview: 7 people. Second: perhaps 12. Both groups, though small, stood at the end. We were sold out on opening night– lots of friends and friends of friends and, once again, they all cheered for us, after which we rushed to our tiny dressing room off the tiny stage and cried in each other’s arms. We knew we had created something special.

And then there was a party—which I can’t remember. Since then, Bedlam’s SAINT JOAN has had acclaimed runs in Maryland, Boston, Houston, New Jersey, D.C. and here in Naples, Florida. It has been performed with the original cast as well as with new actors, many of whom had understudied the original production in New York. In 2018, it was sent on tour for a year with a cast of brilliant young actors, giving theatregoers all over the country the opportunity to see a surprising, funny, moving production of a timeless and timely story.

It was the show that put us on the map as a new company. It was a confluence of all the right things at the right time: A brilliant play, an extremely talented director with a very strong vision, a wonderful, well-matched group of actors, and lo-fi aesthetic that removed any distance between actor and audience, between 1429 and 2012 and between the sufferings of a 17-year-old farm girl who hears voices and those of anyone throughout history who has spoken truth to power and lost.

In the end, who could have predicted that a zero-budget production of a three-hour play written in 1924 by George Bernard Shaw with no sets, no props, no costumes and 4 actors would have so long a continued life and move so many people? Proof that all you need to deeply affect an audience is a good story told well.

Thanks for having us, Naples. We hope you like our story.

One thought on “We Knew We Had Created Something Special”