Allowing Smart and Super-Silly to Live Side by Side

This week’s blog is by The Lady Demands Satisfaction cast member Tarah Flanagan.

I’ve been lucky enough to visit Naples and Gulfshore Playhouse twice in the past few years when my husband, Christopher Gerson performed in The Game’s Afoot and The Tempest.  I’ve explored the city a bit, visited the zoo, the botanical garden, and of course the beach. I’ve had the opportunity to meet and be charmed by Kristen Coury. And so, I was delighted by the prospect of spending eight weeks of mid-winter here, rather than in New York City. Beyond my respect for Gulfshore Playhouse and admiration of the Naples climate, of course I was interested in the particulars of this artistic opportunity. Now, I am not an actor who reads a play and easily envisions how it will all come together in performance. However, reading Arthur M. Jolly’s script, I was giggling out loud, alone in my living room and I took that as a very good sign. It is sparkly and ridiculous. It has all the high-style of British Restoration comedy, the wit and social satire of Molière, and goofy fun of a Bugs Bunny cartoon. Mr. Jolly allows smart and super-silly to live side by side in this world and I find that combination totally delicious.

The opportunity to be in a rehearsal room with Jeffrey Binder (our director) is a gift. Having access to his genius for comedy is like a daily master class. As a cast we often say that we would like to see him perform every role in the play. His rehearsal style is egoless and collaborative and yet he also sets a very high bar. I find it thrilling to try to keep up with him. Our stage management team (Jamie Ekhold and Lyla Bartman) quite literally have their hands full overseeing scene changes and dozens of props and multiple weapons and quick costume changes. The best stage managers need to possess a talent for organization and strategic thinking as well as an artistic eye and excellent people skills. It’s slightly unreasonable to think that these disparate qualities should reside in a single human. We hit the jackpot with both Jamie and Lyla and we are sooooooo grateful for them. 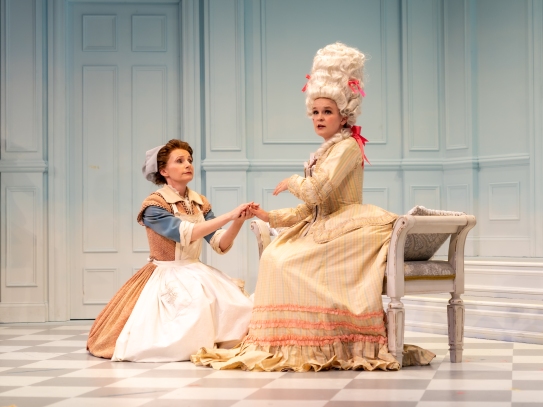 Tarah Flanagan and Betsy Hogg in The Lady Demands Satisfaction

The process of developing our production has been one the most genuinely enjoyable and simultaneously challenging of my career. The requirements of the play mean that the cast must have skill with heightened language, period-movement, combat, clowning, and also be able to connect with the genuine emotional truth of the given circumstances. Once you’ve wrapped your brain around what your character is saying and why they are saying it and have a sense of the “event” of each scene, then coordinating the intricate physicality of farce is all consuming. It’s like patting your head and rubbing your stomach times 10. The character’s physicality combined with the high stakes of the plot are stressful, and the trick of farce is to make it all appear easy. I am still working on that part. The cast is comprised of some of the most talented and diligent artists I have had the pleasure to work with. The play demands a high level of skill and I feel so fortunate to be in their company. They are also particularly kind and generous. The level of physical and mental exhaustion we experienced in rehearsing this play, caught some of us by surprise, and it wouldn’t have been surprising if tempers flared or moral waned. That happens. This particular group really strives to encourage each other’s ideas, proactively problem solve, and protect others well-being. They are lovely.

For tickets to The Lady Demands Satisfaction go to www.gulfshoreplayhouse.org/2019-2020-season/the-lady-demands-satisfaction/.